It’s 2004. Imagine a young nonprofit with a tiny staff, modest budget, and an ambitious mission to improve the social and economic conditions of the Wabanaki tribes – the Maliseet, Mi’kmaq, Passamaquoddy and Penobscot – in Maine. Its name is Four Directions Development Corporation, and it’s one of a small group of Native American Community Development Financial Institutions (CDFIs) who are harnessing capital for communities throughout Indian Country.

One of its first tasks is to tackle a major barrier to homeownership for tribal members: home mortgages. Banks and other conventional lenders don’t lend for properties on reservations because the land is held in trust. As a result, tribal members can’t borrow to buy and improve a home in their community; more significantly, they can’t build wealth.

To make mortgages that are accessible and affordable for Wabanaki families, Four Directions must raise the right kind of funding. But its short track record and small size is seen as a risk, so attracting capital isn’t easy.

Around this time, the Maine Council of Churches was taking a stand against a statewide ballot put forth by the Passamaquoddy and Penobscot Tribes to pursue tribal gaming. After the casino proposition was defeated in a highly charged vote, the Council’s board was compelled to back up its ‘no’ vote with positive action, and soon reached out to Four Directions with a simple question: how can we help?

And thus was born a unique partnership between Four Directions and the Maine Council of Churches to create the Giving Winds Capital Campaign, with a bold goal of raising one million dollars for Four Directions’ loan and financial education programs.

The Giving Winds Capital Campaign, named in honor of one of nature’s most powerful forces, was the first of its kind for a Native CDFI. The campaign’s emphasis, from the start, was on investments in tribal people, not charity. Contributions and loans – ranging from $10,000 to $200,000 –came from more than 150 individuals, churches, and national and regional denominations, including the Episcopal Church, the Religious Society of Friends (Quakers), the United Church of Christ, and the Unitarian Universalists. Over two years, the Giving Winds raised over $1.4 million in donations, low-cost loans and matching funds. These investments provided the essential ingredients for growth – capital, for one, but more importantly, they signaled faith in tribal people – at a crucial time in Four Directions’ evolution.

When the Maine Council of Churches and Four Directions launched the Giving Winds Capital Campaign, neither could have foreseen its lasting and multiplying effects.

Fifteen years later, the Giving Winds remains alive in the many congregations and institutions that have renewed or even forgiven their loans. These investments have provided stable and low- to no- cost capital which Four Directions has used to generate new dollars to expand its programs and impact.

As it envisions its future, Four Directions is well-positioned to create even more opportunities for tribal people in the decades to come.

It’s hard to overstate the significance of the Giving Winds Capital Campaign. It exemplifies the power of true collaboration to build bridges across cultural, spiritual, economic, and personal paths which often don’t cross. The unlikely partnership forged among tensions years ago between a fledging Native CDFI and a faith-based organization has come to embody the spirit of Four Directions’ cherished value of wicuhkemtultine – “Let’s help each other” – in its purest form, and calls us to imagine: what else is possible when we start with a simple question? 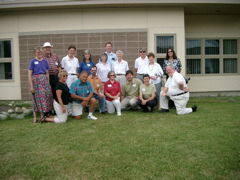 A site visit to Indian Island by Giving Winds advocates

If you’re interested in investing in the Giving Winds Capital Campaign, please contact Four Directions at info@fourdirectionsmaine.org or call 207-866-6545.

For more information about Four Directions Development Corporation, visit fourdirectionsmaine.org, and the Maine Council of Churches at mainecouncilofchurches.org.